Our Fabergé-inspired Easter eggs were extremely popular this year – it was hard work to keep up with the orders.  These beautifully designed and packaged eggs, filled with 3 hidden mini-chocolates, were perfect as Easter gifts – so we can understand the popularity.   Then, of course, there is also the intrigue and story of the Fabergé egg. 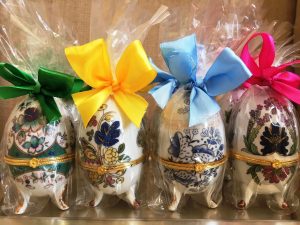 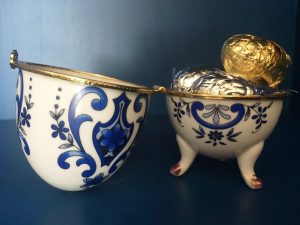 History tells us that the first ever Fabergé egg was crafted in 1885 for Tsar Alexander III, as an Easter egg for his wife, Empress Maria Fedorovna.  It is believed that the inspiration came from an egg owned by the Empress’s aunt, Princess Vilhelmine Marie of Denmark.   The first egg, known as the Hen Egg, was crafted from a gold foundation, and opened to reveal a multi-coloured gold hen.  The hen in turn opened to reveal a diamond replica of the imperial crown, with a suspended ruby pendant.

The Empress was so intrigued with the gift and it its hidden jeweled surprises, that Tsar Alexander then appointed the goldsmith, Peter Carl Fabergé, to create the Imperial Easter eggs every year.   And so began the Imperial tradition that continued for 32 years until 1917, producing the most opulent and intriguing Easter gifts. From 1887, Faberge was given complete freedom in the design of the eggs, and they became more elaborate.  Each egg was completely unique and contained a surprise. 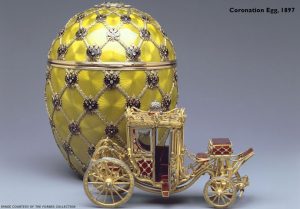 After the death of Alexander III in 1894, his son, Nicholas II, continued the tradition.  The Coronation Egg, pictured above, was created to commemorate the coronation of Tsaritsa, Empress Alexandra Federovna.  Fitted inside the egg was a precise replica of  the 18th-century Imperial coach that carried the Tsarina Alexandra to her coronation at Moscow’s Upensky Cathedral.

The Fabergé eggs were made each year, except during the Russo-Japanese war in 1904 and 1905, until 1917.  In 1918, following the revolution and the nationalization of the Fabergé workshop in St. Petersburg, the family left Russia.  In 1924, Peter Carl Fabergé’s son, Alexander, opened Fabergé et Cie in Paris, adding the city’s name to their trademark –  Fabergé Paris.  The trademark has subsequently been sold several times and is now owned by Faberge Limited, who continue to create egg-themed jewelry.

Faberge eggs have become symbols of intrigue, splendour and wealth.  No wonder they have been so popular as gifts!  I think we will have to plan to have more in stock next year …

Want to join the discussion?
Feel free to contribute!